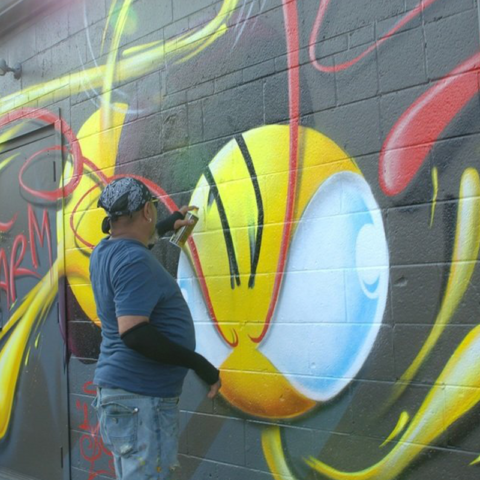 The Royal “Kingbee” is a New York City-based artist. He was born in Harlem NYC and raised in the Bronx in the early 70’s. KingBee is the Founder of UWLAW (Urban Writers Logos and Walls), one of the most talented graffiti/art crews in New York City throughout the 90’s. He began his career painting graffiti on walls until gathering recognition and eventually being commissioned to perform his artistic abilities for numerous businesses, public and private all throughout the city of New York.  His iconic original character creation of the “Bee” is his signature character that is recognized worldwide. KingBee has most recently began using his Bee character to bring more awareness to the declining bee epidemic worldwide.   KingBee still resides in the Bronx, here he continues to draw inspiration from his surroundings within one of the most vibrant cities in the world.