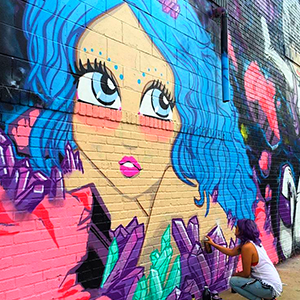 LOVENOTES is a New York City based visual artist whose alias formed at a young age through her submergence in Bronx Graffiti culture. Heavily influenced by anime, youth culture, nature, and fairytales, LOVENOTES strives to create artworks that are charged with her emotional and spiritual vision of the world usually involving feminine figures. Still very passionate about graffiti culture, Lovenotes has branched into other forms of art. She primarily works in paint but has a great love for using different mediums, methods and styles to spread the movement of love.